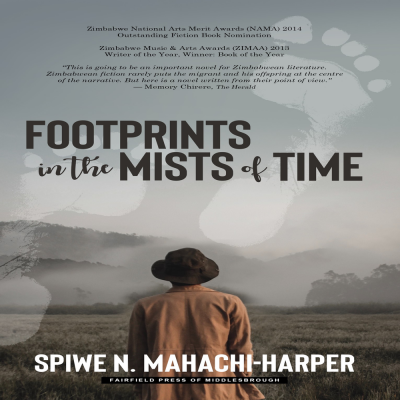 Footprints In The Mists Of Time

*Zimbabwe National Arts Merit Awards (NAMA) 2014, Outstanding Fiction Book Nomination *Zimbabwe Music & Arts Awards (ZIMAA) 2013, Writer of the Year Nomination, Fiction Book of the Year Winner "This is going to be an important novel for Zimbabwean literature. Zimbabwean fiction rarely puts the migrant and his offspring at the centre of the narrative. But here is a novel written from their point of view.", Memory Chirere, The Herald "The novel, which is essentially about labour migrations in Southern Africa, can be read through multiple lenses. There is an extended debate, often couched in broader economic, political and social terms, on the causes and effects of migration on the receiving and sending countries. Spiwe Mahachi-Harper contributes to this debate in novel form" - Kupukile Mlambo, Ph.D. (Econ) Deputy Governor, Reserve Bank of Zimbabwe A Zimbabwean story like no other.... A saga woven around poignant themes of migration and belonging and heritage, spanning 4 generations that lived through the colonisation of central and southern Africa by Britain, the protracted struggle against White Settler domination leading to the optimism of Independence and Black Majority rule. The story of the mostly young men who left what is now Zambia and Malawi to work in the mines and on the farms of what is now Zimbabwe, and whose descendants still bear the label Vabvakure, 'The People From Afar. The story of Mavhuto, born to see the emergence of independent Zimbabwe, who must look back before he can look forward. Back to Dhairesi, his mother, now broken by a life-long quest to belong, his grandfather Masauso, who was born in the community of migrant mineworkers, and his great-grandfather, Bhaureni, who walked those miles from Nuhono Village in Nyasaland. The footprints are still there, in the mists of time. Never before has the narrative of Those Who Come From Afar been brought to the fore in Zimbabwean literature. Told in Spiwe N. Harper's inimitable and engaging style. ABOUT THE AUTHOR Spiwe Nancy Mahachi-Harper, a teacher by profession, was born in Zimbabwe. She is the author of two other novels, Trials and Tribulations, Echoes In The Shadows, and a collection of short stories, Tales from the Kombi- The Shattered Pattern of Life. She holds a Bachelor's Degree in Education from the University of Zimbabwe and a Diploma in French Civilisation and Culture from the University of Potiers. She divides her time between her native Zimbabwe and the United Kingdom.

Please login to borrow the book.